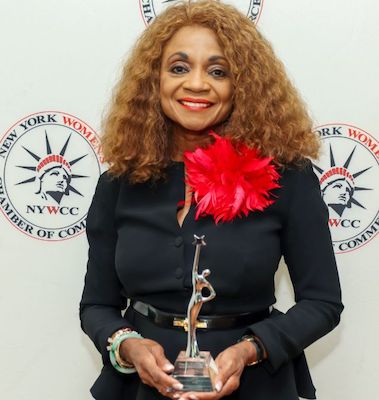 Eugenia Foxworth has earned the distinction of being named president of the International Real Estate Federation, USA Chapter — the global business networking organization for all professionals associated with the real estate industry.

The owner of Foxworth Real Estate in New York, Foxworth counts as the first Black to take the helm

“In 70 years, I am the first African American elected as president. I think this election will enable me to help those within our community, so it has been a blessing,” Foxworth said.

In an industry dominated by white agents and brokers, Foxworth has thrived.

“I had wonderful mentors, including my father, who told me that you could do anything that you want as long as it’s not illegal, immoral and you don’t mind people doing it to you,” Foxworth insisted.

While she has excelled in the real estate profession for more than 20 years, Foxworth also harbors several hidden talents.

Her accomplishments include proprietor of a fine arts gallery on Manhattan’s Upper Eastside, owner of a national skin care line, graduate of Drexel University with a degree in engineering and survivor of a virus that attacked her heart at a young age.

“That’s how I got into art. I guess I became a fine arts dealer without realizing I was becoming a fine arts dealer.,” said Foxworth who after receiving her college degree set her sights back to the world of art.

“I never practiced engineering,” she admitted. “I have a funny little mind and get bored easily, so I just went back to what I really loved.”

Ironically, it was her love of the arts that eventually led her to real estate. By then, her Foxworth Gallery on East 65th Street in Manhattan was doing so well that she was looking for a new, larger space.

Her location request was specific — East 57th to 79th streets between Madison and Park Avenues. “The Realtors I was working with kept taking me to the West Side and were showing me second- and third-floor options,” she recalled.

Finally, frustrated that they weren’t finding what she wanted, Foxworth decided to do it herself by getting her own real estate license. She took an accelerated course, passed the New York State exam and received her license, starting with a smaller brokerage firm in the city.

Foxworth said the stimulus and lack of spending since the beginning of the pandemic have allowed many to save money to buy property.

“Prices are going up and a lot of our inner-city areas are saying,‘I’m not giving this away,’ and they’re also increasing their prices,” Foxworth asserted.

Foxworth expressed mixed emotions about the eviction moratorium, expressing that her heart goes out to those facing eviction because of a loss of work while also feeling bad for landlords who haven’t been paid rent.

“It’s a sad time but a good time for people to be able to maintain their home,” Foxworth said.

“The moratorium is helpful, and it gave so many of us in the Black and brown community a chance to regroup. A lot of us have been affected. The rental market has so many who can’t afford to buy. There also are those who could afford to pay, and they took advantage of the moratorium, and those hurt landlords. These are working-class people, these landlords in most cases,” she said.

Foxworth has received praise for successfully helping homeowners save their properties from foreclosure.

“One should really know their community and I helped to educate people who were purchasing or already purchased homes,” Foxworth said. “I did it for free because I wanted to let them know what to do, how to get renters for properties, how to budget and where to get financial assistance.”

Because of her dedication, Foxworth received the Woman of Excellence award from the New York Women’s Chamber of Commerce. In addition, the Real Estate Agent Advisor highlighted her as “One of the Phenomenal Women in Real Estate.”

As the new FIABCI-USA president, she aims to increase exposure for the organization.

“Very few people know about us even though we’re in 65 countries,” said Foxworth, who has hired a public relations firm to assist her in spreading the news around the globe.

She plans to start a podcast that will cover all topics — not just real estate.

“My mission is to help our people, teach them. That’s what I want to do,” Foxworth said. “Gentrification has taken a lot of our history and there are people in shelters who are working people who can’t afford the rent. I want to help change this.”

I’ve worked for the Daily News of Los Angeles, the L.A. Times, Gannet and the Times-Tribune and have contributed to the Pocono Record, the New York Post and the New York Times. Television news opportunities have included: NBC, MSNBC, Scarborough Country, the Abrams Report, Today, Good Morning America, NBC Nightly News, Imus in the Morning and Anderson Cooper 360. Radio programs like the Wendy Williams Experience, Tom Joyner Morning Show and the Howard Stern Show have also provided me the chance to share my views.