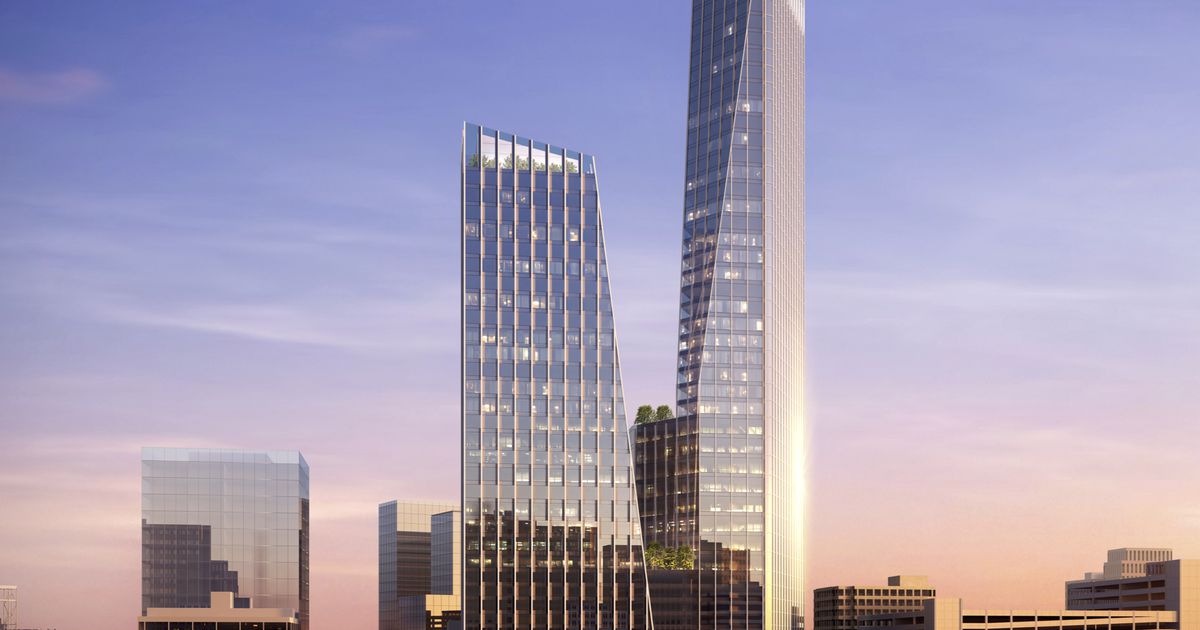 The race to build the next downtown Dallas skyscraper is heating up.

A handful of developers have been pitching plans for new office towers in Dallas’ central business district.

Now developer and investor Scott Rohrman is putting forth his idea for a 42-story high-rise project on downtown’s east side.

The complex would include a combination of uses in two towers. The buildings would have about 200,000 square feet of offices, 250 hotel rooms and 224 apartments. There would be ground-floor retail space, too.

“We are not going to go build it speculative-basis,” Rohrman said. “But we are going to put our name in the hat for office users.

“We are looking to have preleasing on the tower or secure a capital source that would want to do a speculative building.”

Designed by Dallas’ The Beck Group, the skyscraper would take up most of the block at Elm and North Pearl streets near Interstate 345. Two small buildings and surface parking now occupy the site.

“We did 11 transactions to tie all this property up,” Rohrman said.

The development site is at one of the gateways to downtown and within a few blocks of four of the central business district’s new parks.

“What we want to do is build something iconic — something that anchors the area,” Rohrman said. “As you are driving down the freeway where it curves, your vision of this property here is much better.”

The skyscraper would be the tallest on the eastern edge of downtown — an area that is seeing rapid redevelopment.

Rohrman began buying small buildings and parking lots in the area several years ago and has sites on five blocks. His holdings include the more than century-old former Masonic and Western Union building on Main Street and the new SOVA Hotel building on Commerce Street.

“When we started buying here years ago, it was the forgotten area of downtown,” he said. “We just bought it because we like it.

“We really believe in the east side of downtown Dallas.”

The downtown neighborhood is now home to the big East Quarter redevelopment. And just across the freeway in Deep Ellum, there’s the new Epic office, hotel, residential and retail development.

Two new green spaces — Harwood Park and Carpenter Park — are in the works in the area.

Rohrman has a track record of buying undervalued real estate in up-and-coming neighborhoods. His 42 Real Estate started purchasing the first of more than 40 properties in Deep Ellum — buildings and vacant sites — almost a decade ago.

Since the Deep Ellum sale, Rohrman has been buying real estate on the east side of downtown and along Akard Street in the Cedars neighborhood. “We like properties that are urban and downtown,” he said.

Rohrman and 42 Real Estate’s Benton Payne have been working on plans for the Dallas property.

In May, Ross Perot Jr.’s Hillwood Urban pulled the wraps off designs for a 38-story office tower proposed for the north side of downtown at Woodall Rodgers Freeway and Field Street.

And Dallas businessman and property investor Mike Hoque and his Hoque Global have teamed up with Lanoha Real Estate of Omaha, Neb., to work on plans for a 40-story mixed-use tower on the south side of Dallas City Hall.

Another group that includes Kaizen Development and Woods Capital is pitching plans for a 6-acre project at Field Street and Woodall Rodgers that would include more than 1 million square feet of high-rise offices, apartments, hotel rooms and retail.