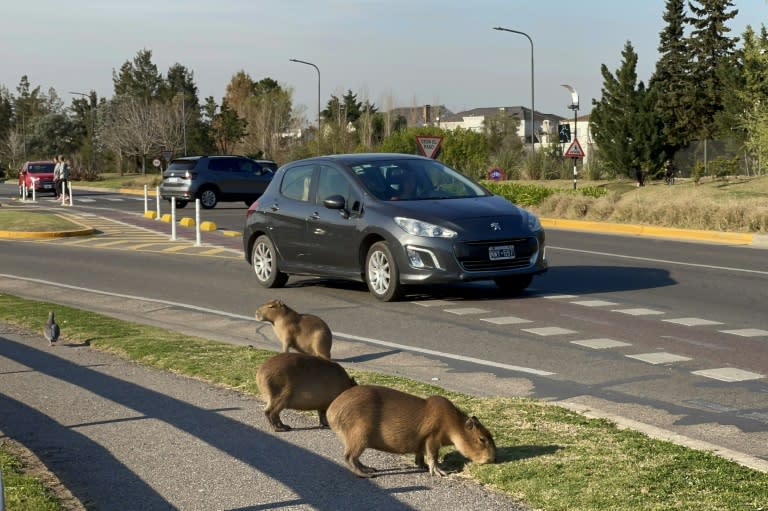 Families of a giant rodent native to South America have been invading a luxury gated community in Argentina, highlighting the country’s controversial environmental and social policies.

Nordelta is a 1,600 hectare (3,950 acre) luxury private urban complex built on the outskirts of Buenos Aires, on a wetland from the Parana river that is the capybara’s natural habitat.

Also known as a carpincho or chiguire, the capybara is the largest rodent in the world and can measure up to 1.35 meters (53 inches) in length and reach 80 kilograms (176 pounds) in weight.

“Nordelta is an exceptionally rich wetland that should never have been touched,” biologist Sebastian di Martino, conservation director at the Rewilding Argentina foundation, told AFP.

“Now that the damage has been done, the residents need to reach a certain level of coexistence with the carpinchos,” said Di Martino.

Built 20 years ago, Nordelta has homes, offices, a shopping center, schools, a church, a synagogue and an artificial lake that is home to aquatic birds.

But since work to build a clinic began on the last remaining piece of natural land, many residents have noted a sudden capybara “invasion.”

“Carpinchos were always here. We always saw them from time to time. But three or four months ago (builders) went for their last remaining stronghold and the stampede began,” Perla Paggi, a Nordelta resident and capybara activist, told AFP.

Nordelta and similar luxury developments on wetlands have also been a controversial topic in Argentina.

As well as eating into the capybara’s natural habitat, large scale development of the wetland means the soil can no longer absorb heavy rains, which then end up flooding poorer surrounding neighborhoods.

In politically polarized Argentina, leftists have long attacked Nordelta as an example of elite exploitation, while jokingly presenting the capybara as a hero of the working classes.

Di Martino says the proliferation of capybaras is harmful to the environment, but that too is the fault of humans.

Capybaras are prey for jaguars, pumas, foxes, wild cats and wild dogs but all of these animals are now virtually extinct in Argentina.

“It’s happening all over the country, in urbanized and non-urbanized areas. It is caused by the alteration and degradation of ecosystems. We’ve extinguished a ton of species that were their natural predators,” Di Martino told AFP.

“The carpincho needs a predator to reduce its population and also make it afraid,” said Di Martino.

“When there’s a herbivore without a predator threatening it, it doesn’t hide and can spend all day eating, thereby degrading the vegetation which traps less carbon and contributes to climate change.”

In the wild, capybaras live between eight and 10 years and give birth to litters of up to six young, once a year.

Not everyone in Nordelta views them as a nuisance. In fact they have become the main attraction in the residential complex.

Drivers slow down to take pictures of them, while children seek them out at nightfall for selfies.

Some Nordelta residents want to create a natural reserve for the capybaras to live in.

“We have to learn to live beside them, they’re not aggressive animals,” said Paggi.

“A 20 to 30 hectare reserve is enough to maintain diversity. They are defenseless animals, we corner them, we take away their habitat and now we complain because they’re invading.”

Di Martino, though, says a natural reserve would change nothing.

“It’s complicated, you need to keep them away from children and pets. And then you’re going to have to find a way to reduce the population, maybe moving them to other places.”